Romans are rarely at a loss for a good conversation.  Whether on an evening passeggiata  or sitting in a wine bar, couples or groups will be seen engaged in animated discussions on life, love or politics with hands used to emphasize crucial points. Indeed, even the marble statues scattered throughout the cityscape participate in the banter – well, at least six of them do. These are the so-called statue parlanti (“speaking statues”), five of which are located in the area of the ancient Campus Martius.  So-called because since the Renaissance they have served as a form of public bulletin board or low tech blog post with continuously changing collections of notes, poems, political commentary and Roman witticism. Their names – Pasquino, Abate Luigi, Madama Lucrezia, Il Facchino, Marforio and Il Babuino – were provided by the denizens of the city with little reference to the subject of the original carving. 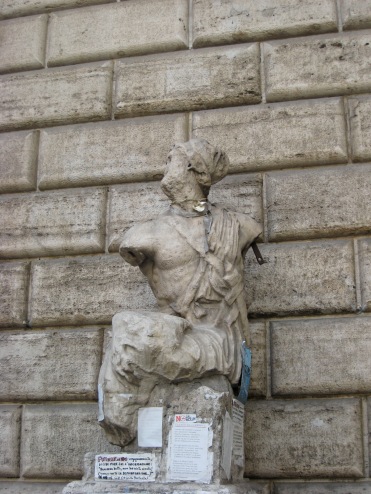 The first, and probably the most famous of the speaking statues, the “Pasquino” is located in the (naturally) Piazza di Pasquino, just to the south and west of the Piazza Navona. Excavated near its present location and placed on its pedestal circa 1501, the statue has been identified over the centuries as numerous mythological and historical figures such as Hercules and Alexander the Great. Since the nineteenth century, however, it has been designated generally as a Roman copy of a Hellenistic representation of Menelaus, the husband of Helen of Troy, holding the body of Patroclus after his death at the hands of the Trojan warrior Hector.[1]  Given its find location, it was possibly decoration for the stadium (now the Piazza Navona) built by Emperor Domitian (r. 81-96 C.E.) and used as the venue for foot races, boxing and other Greek-style games. The first poem recorded to be attached to the statue was in 1501, and while displayed to the public, the early poems and sayings were likely written by members of the Curia and best understood by other members of the Church hierarchy.[2]

As early as 1500, the statue was employed as backdrop for religious processions passing before it on the feast day for St. Mark (April 25). Each year during those festivities, it was dressed for twenty-four hours as a Roman god or goddess including at various times Mars, Venus and Mercury. Contests were then held for poets to write and attach verses related to the chosen deity. The choice of a particular god can be pinned to important political events such as the selection in 1509 of Janus, a god whose temple doors were opened by the Romans in time of war, when fighting broke out that year between the Papacy and the Venetian Republic. [3]

Pasquino in a print by Antoine Lafrery, 1550

The source of the name “Pasquino” is uncertain. He is variously described as a barber, tailor or schoolmaster from the area and possibly the source of the first witty puns attached to the statue’s base. [4] According to one story, however, Pasquino was a weaver for the Papacy who would bring back to his shop wonderful gossip from behind the Vatican walls. Following Pasquino’s death, the statue was erected by his shop and thereafter used for poking fun at Rome’s rulers.[5] The English term “pasquinade,” a publicly placed satire or lampoon, derives from his name. At some point in the sixteenth century, anti-papal sentiments were affixed to the statue, including perhaps the most famous one that attacked the Barberini Pope Urban VIII for hauling off and melting down the bronze porch trusses from the Pantheon: “Quod non fecerunt barbari fecerunt Barberini” (“Where the barbarians failed, the Barberini succeeded”). During the Fascist era, a brazen pasquinade was attached to the weather worn Menelaus updating the challenge to Il Duce: “Et quod non fecerunt Barberini, fecit Mussolini.”[6] Always ready to announce change is in the air, Pasquino was spray painted in the 1980’s with graffiti declaring his gender as female – “Pasquina.”[7]

Pasquino not only mumbled to himself but had “conversations” with the other talking statues, particularly Marforio, the first century C.E. monumental statue of a river god found near the Roman Forum and now in the courtyard of the Palazzo Nuovo on the Capitoline Hill (outside of the Field of Mars). Comments would be left on one statue with ripostes on another. For instance, when Napoleon Bonaparte occupied Rome, one wit affixed to Pasquino the words “I Francesi son tutti ladri” (“The French are all thieves”) to which another pasted on Marforio the punning reply, “Non tutti – Ma Bona Parte” (“Not all – but a good part”). [8]

A few hundred feet to the southeast of Pasquino another ancient statue was excavated in the area where the Theater of Pompey and its extraordinary portico once stood. (See earlier post “So… you want to spend the night in an ancient theater?”) It was placed near its find location by a side wall of the Basilica of Sant’Andrea della Valle at Piazza Vidoni, No. 4. The statue is of a Roman citizen in a toga, possibly a senator, and has been called  “Abate (Abbot) Luigi,” perhaps after a sexton from the nearby church Santissimo Sudario all’Argentina. [9] While Luigi functions as one of the statue parlanti, his tongue wagging is accomplished with a transplanted  head and occasionally with no head at all. One photo from the public domain shows an ill fitting bust placed atop his shoulders while a street view from Google Earth reveals the loss of this part of his anatomy.

The inscription on the base advises passers-by of his important role:

I was a citizen of Ancient Rome
Now all call me Abbot Louis
Along with Marforio and Pasquino I conquer
Eternal fame for Urban Satire
I received offences, disgrace, and burial,
till here I found new life and finally safety

The third of the “speaking statues” in the Field of Mars and the only female among the group (with the exception of the temporary “Pasquina”) may have an Egyptian origin. This is the giant half-length statue tucked away in a corner of the Piazza di San Marco. Known now as “Madama Lucrezia,” this statue over nine feet in height has been identified as the Egyptian goddess Isis from the nearby Temple of Isis and dating to the third century C.E.[10] The temple to Isis was one of two Egyptian temples close by the Pantheon and the source of numerous statues now scattered throughout Rome’s museums and public spaces. The statue was named after Lucrezia d’Alagno (1430-1479), the lover of the King of Naples, Alfonso V. According to some, Lucrezia came to Rome with gifts (including this bust) to entreat Pope Calixtus II to allow Alfonso to either have two wives – his current wife and, of course, Lucrezia – or to grant the king a divorce. The ploy failed, Lucrezia returned to Naples but the bust stayed. [11] Reconciling the source of the statue from a nearby dig site with the story of its transportation to Rome by Lucrezia d’Alagno is just one more example of the difficulties in tracing the history of Roman monuments. Oh, if the statues could really speak! 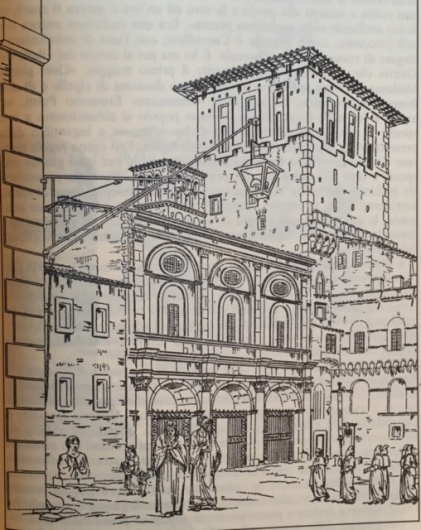 A. Uggeri, Print of Madame Lucrezia in Piazza San Marco (1827)

The next “speaking statue” in the Campus Martius is “Il Facchino,” the Porter. This diminutive carving is located on the Via Lata, just off the Corso and directly north of Madama Lucrezia. Unlike the other statue parlanti , Il Facchino is not ancient but was carved in the sixteenth century. Supposedly, it depicts Abbondio Rizio who died while transporting a barrel of wine. More likely, it depicts an “acquaiolo,” a person who filled barrels with water from the Tiber or other source and sold them to houses before the advent of indoor plumbing. [12] Rather than holding water, however, the barrel in the porter’s arms serves as a fountain providing fresh water to all passers-by on this quiet street.

The last of the statue parlanti can be found still further north on the Via del Babuino in the direction of the Piazza del Popolo. Certainly the ugliest of the “speaking statues,” this one started as a stone carving of old Silenus, companion to Dionysius, the god of wine. The statue was donated to the city in 1571 for use as a fountain by a rich merchant in response to the grant by Pope Paul IV of rights to take water for his home. The public decided early on that the statue lacked any aesthetic value and was dubbed “Il babuino,” the baboon. As with Pasquino, the statue’s fame resulted in the street being named after it. 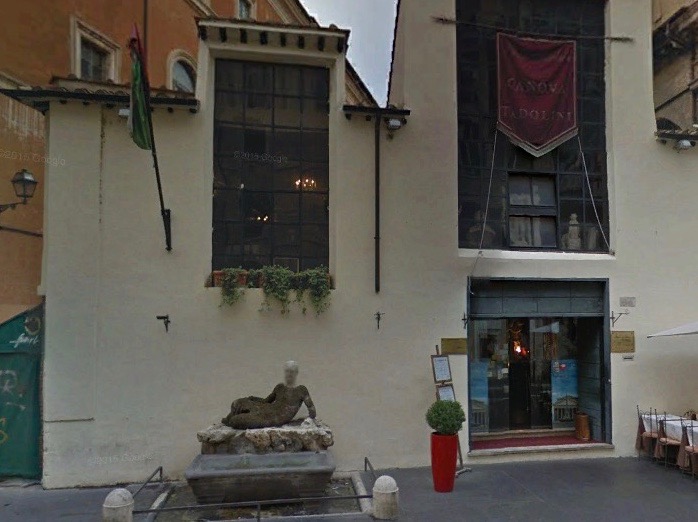 When next in Rome and you walk past one of these statue parlanti look up from your smartphone and consider how these monuments have enlivened Rome’s living spaces over the centuries and provided a communal outlet for expression and debate so different from our increasingly password protected, electronically transmitted and silently performed modern communications.

[1] See A. Reynolds, “Cardinal Oliverio Carafa and the Early Cinquecento Tradition of the Feast of Pasquino,” Humanistica Lovaniensia, Vol 34A, p. 184, n. 32 (1985). See also L. Barkin, Unearthing the Past – Archaeology and Aesthetics in the Making of Renaissance Culture, 211  (Yale University Press 1999).

[7] I. Rowland, The Culture of the High Renaissance – Ancients and Moderns in Sixteenth-Century Rome, 28-29 (Cambridge University Press, 1998).