Of the many great joys of walking through Rome, high on the list is hopping off the busy thoroughfares and meandering through the quiet labyrinthine side streets that criss-cross the historic center. Many date to the Medieval period and were built over and around ruins of ancient baths, theaters, stadiums and porticos.  One such delight is the Via dell’Orso, a wonderful narrow street running generally east/west a few blocks north of the Piazza Navona.  While the Piazza Navona was Emperor Domitian’s stadium for Greek style games in the late first century C.E.and was in a line with Nero’s bathhouse and other amazing structures, the Via dell’Orso is located in that part of the Campus Martius that the ancient geographer Strabo said was “covered with grass throughout the year.”[1] Possibly, it was near to a practice race track where charioteers would hone their skills before entering the Circus Maximus.[2] 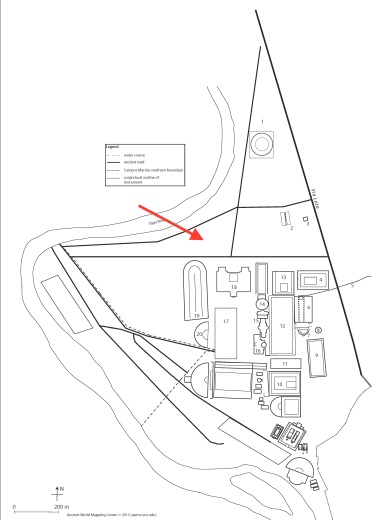 During the Middle Ages the street became part of a region (rione) of the city that ran to the Pont Sant’Angelo, the ancient bridge that crosses the Tiber to reach the Castel Sant’Angelo, and gave the area its name “Ponte.” The feel of that time period remains as you saunter down the Via dell’Orso. Where the road runs into the Via dei Soldati at the western end is the Albergo dell’Orso (Bear’s Inn) that dates to the fifteenth century and was used as a hostel by pilgrims travelling to Rome. Roman columns are imbedded in the wall and a carving of a lion guards the opposite corner. 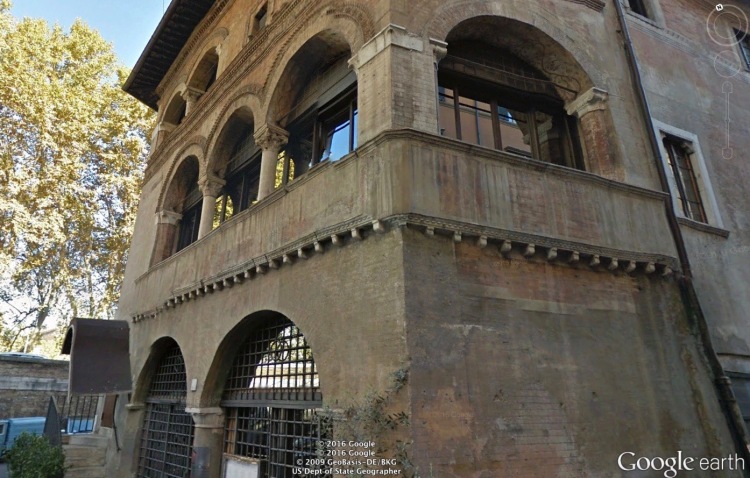 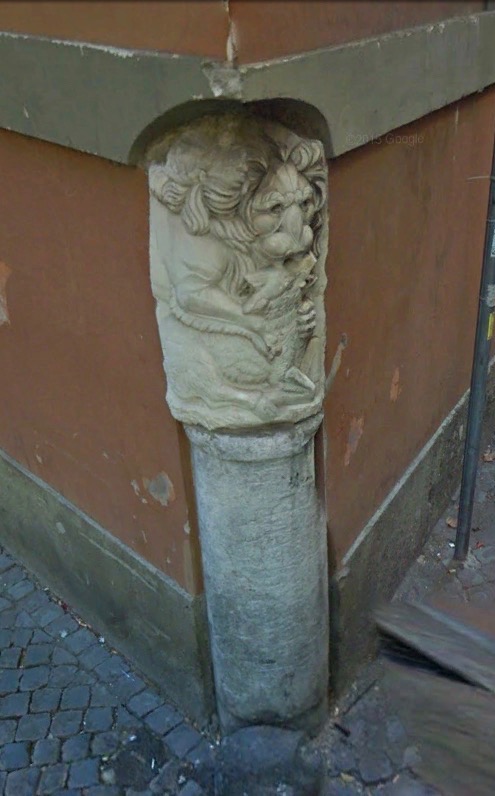 Further east at the junction of three streets where the Rione di Ponte touches the borders of two other regions is an odd corner building that for many years housed a wonderful barber shop with the word “barbiere” still chiseled over the lintel. Above the shop can be seen a Medieval tower built in the eleventh century and belonging to the Frangipane family, a powerful Roman clan. Called “Hilda’s Tower” in Nathanial Hawthorne’s The Marble Faun (1860), the structure is known by Romans as the Torre della Scimmia (“Tower of the Monkey”) by reason of a wonderful legend attached to it. As the story goes, in the seventeenth century a pet monkey escaped from its owners’ home in the building under the tower carrying in its arms their young child. With the infant in its clutches, the monkey climbed to the top of the Frangipane tower. The pet’s owner and child’s father was able eventually to call the monkey down with the baby retrieved unharmed. A statue of the Virgin Mary with the infant Jesus was placed on the top of the tower to commemorate the miraculous save, and it may still be seen today.[3] 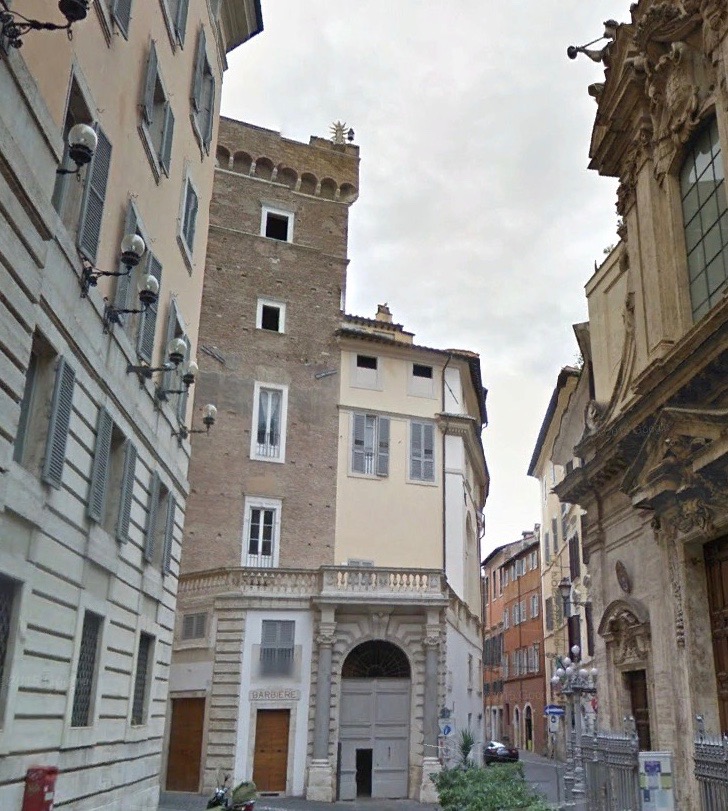 Between the Bear’s Inn and the Tower of the Monkey is another gem, literally. At Via dell’Orso 57 will be found the small jewelry shop Massimo Maria Melis. Massimo Melis is an artisan of the highest order, meticulously crafting beautiful gold and silver rings, necklaces and bracelets using his original designs that reflect ancient baubles. 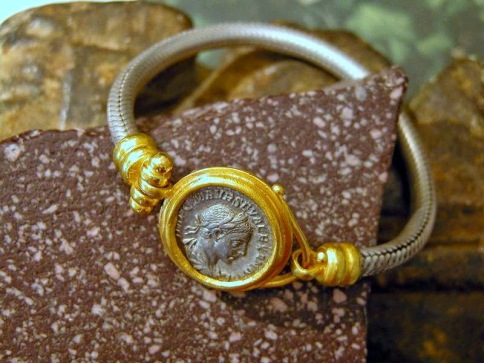 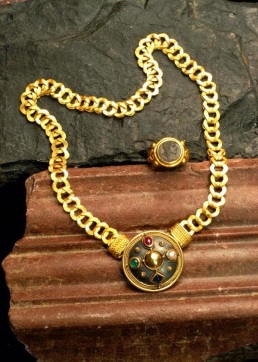 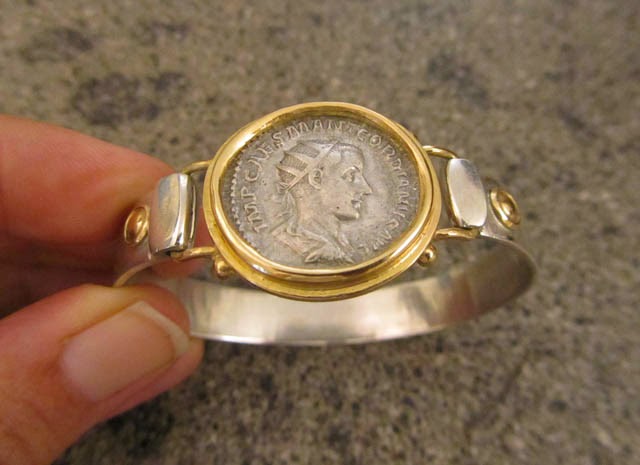 Some are even set with ancient coins and Roman glass. Massimo Melis started as a cinematic costume designer and actor in German cinema before opening up his goldsmith shop more than four decades ago. Awarded the title of Master Craftsman by the Mayor of Rome, he has been creating remarkable and unique pieces of jewelry from the present location for 36 years. The pieces are heated, hammered and fastened on site. Many wonderful hours have been spent over the decades watching Massimo and his assistants ply their craft and his beloved wife Maria handling the business end, all the while discussing with friends entering the shop family events and politics and sharing photos. This is a shopping experience of the olden days, perhaps of the times when shouts could be heard down the street as a pet monkey scaled the Frangipane tower. The experience within the Melis shop is as rare as the jewelry and just as precious.

[2] See Jacobs and Conlin, Campus Martius – The Field of Mars in the Life of Ancient Rome (Cambridge University Press, 2015), 68 and notes.