Many architectural treasures of ancient Rome are kept hidden from the public behind locked doors, but every once in a very long while (and for no apparent reason) a key will turn and creaky hinges squeak as visitors are given a short peak. When that occurs you should run, not walk, to get inside before the door is slammed shut once more. So it was delight that I read today on the web site of the Turismo Culturale Italiano that on Sunday February 21 at 10:15 the usually locked door at Via del Campo Marzio, No. 48 will be opened to lucky ticket holders to peer down twenty feet below street level to a small section of travertine with an inlaid bronze marker that few have seen. Two millennia ago, the bright bronze reflected the Roman sun except where a shadow fell across a portion of it at noon, marking the sun’s daily movement through the zodiac. This was the Horolgium  Solarium Augusti, a giant meridian, or type of sundial, that marked the day of the year rather than the time of day and helped show the accuracy or inaccuracy of the Roman calendar. Erected at approximately the same time as the Altar of Augustan Peace (Ara Pacis) (see earlier post), the Horologium consisted of a seventy-one foot high spindle of Egyptian granite,or gnomon, that cast a shadow across a north/south bronze marker in travertine. The gnomon was located just north of the Italian Parliament in the Piazza del Parliamento but came crashing down centuries later and was not excavated until the eighteenth century and re-erected in 1789 in the Piazza di Montecitorio where it may be seen today. 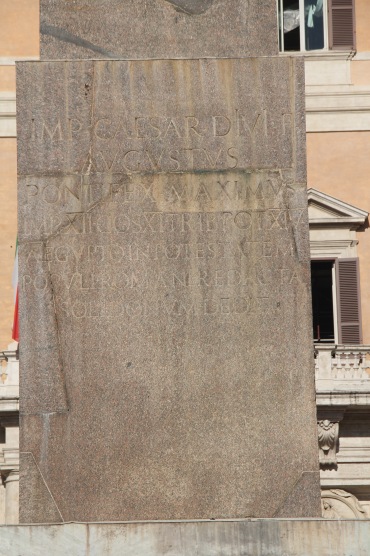 The pavement marker, however, was later covered over and not rediscovered until 1979. While the small section found under Via del Campo Marzio, No. 48 was thought at the time of its discovery to be part of a much bigger complex of bronze lines in the shape of a double ax approximately 150 meters wide, no other lines have been found. This has led many scholars to conclude that the meridian was only the one bronze line running north/south. On the section to be opened to the public may be seen inscriptions in Greek noting “Etesian winds stop” and the “beginning of summer” as well as zodiacal signs.[1]

Just to the north of the Horologium’s gnomon was the tall Mausoleum of Augustus and just to the east was the Altar of Augustan Peace, creating a triangle of imperial structures that reminded visitors to the Campus Martius of the era of peace and well being ushered into Rome during the reign of the first emperor. With baroque buildings now filling the space, it is difficult for modern visitors to gain a sense of the visual impact of these monuments, but on a quiet Sunday in February and for 15 Euros, you can look down at the imperial ground level and take a chance that you will feel it. It is worth it.

For greater detail on the history of the Horologium and a downloadable walking tour of the area in which it is found, see P. Jacobs, A Walk Through The Field of Mars – Rome’s Ancient Campus Martius A Piedi (Walk Three, Nos. 2 and 11).